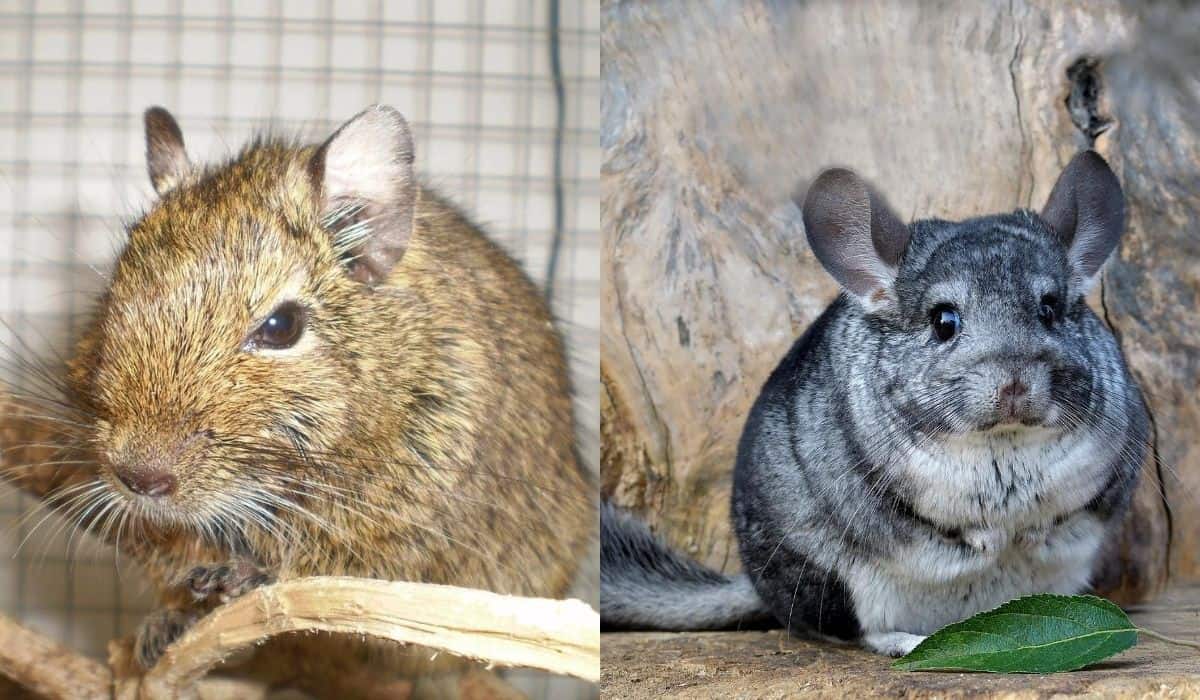 Chinchillas and degus are both amazing little animals and are similar in so many ways.

This has led owners to wonder if chinchillas and degus can live together? Or if there are underlying reasons why they should be separated at all costs.

In this post, we will take a deep look at the care requirements and behaviours of both chinchillas and degus so you can make an educated decision before attempting to house them together.

We will use the opinions and research of pocket pet experts and veterinary outlets to back up the points we make and bring you only the most relevant information.

Read on to discover…

Before we get into this post and discover if chinchillas and degus can live in the same cage, room and family home, first let’s see if they are similar in any way?

First of all, chinchillas originate from Chile in South America where they live high in the Ande mountains.

Chinchillas are naturally hard animals and enjoy the company of other chinchillas. In the wild, they can live in groups and communities of up to 100.

It may come as no surprise that degus are also hard animals and enjoy living in large groups of anywhere up to 100 too.

The most noticeable difference between the two animals probably comes from the famous fur of the chinchilla.

While degus have soft and silky fur, it’s not nearly as impressive as the coat of a chinchilla.

Chinchillas have around 20,000 hairs per square cm and their hair is so dense that flies can’t live on it as it causes them to suffocate.

When it comes to the behaviour and temperament of a chinchilla, they can be lively and active but at the same time shy.

While the degus offer many similar behaviours they are also very vocal and can sometimes become aggressive if they don’t get enough social interaction.

The lifespan of both animals is also very different. Chinchillas can live anywhere from 10-20 years. Source:

While degus may only live 6-7 years in captivity, which is a far contrast from an animal they share so many similarities with.

Overall, chinchillas are pretty similar but they do have some personality and behavioural differences that make them stand out from each other.

Can Chinchillas And Degus Live Together In The Same Cage?

If you own a chinchilla and a degu or are thinking about bringing home a degu, then you will probably be wanting to know if they can live together in the same cage.

The answer to this is no, chinchillas and degus can’t live together in the same cage.

Chinchillas and eat a diet consisting of mainly hay followed by pellets and small amounts of veggies.Source:

Similarly, degus also eat a diet that is almost identical to this with hay being their main source of nutrition Source:

According to Bluecross, degus thrive in temperatures under 20°C which is the same for chinchillas.

They both also love the same kinds of bedding and are happy in the same tall cages.

Right about now, you are probably thinking it’s a great idea to house your chinchilla and degus together right? Well not so fast…

There are actually a pretty big reasons why you really don’t want to do this!

The first and most important thing to mention is that chinchillas and degus have totally different sleeping patterns and habits.

This is surprising for two animals that are very similar to each other in a lot of ways.

Many experts including Pet-Md state that chinchillas are nocturnal, although they are also known to be crepuscular so either way they will spend most of the day sleeping and become active during the night.

The experts at Pet-MD also wrote in a recent article how degus are actually diurnal so they are active through the day and sleep through the night.

This is actually pretty rare for small rodents as most will be nocturnal for example hamsters.

Unfortunately, this means that housing chinchillas and degus in the same cage is a really bad idea.

While one is wanting to sleep the other one will be active and vice-versa.

This can cause lots of problems with stress, anxiety, irritability and even cause fighting.

For this reason alone you should never house a chinchilla and a degu together in the same cage.

Chinchillas & Degus May Not Get Along Together

Another huge reason why chinchillas and degus shouldn’t live in the same cage is that there’s a big chance they might not get along.

Even though both of these animals are herd animals and enjoy the company of others, it’s always best to make sure that the company comes in the form of their own species.

Housing 2 different animals in a cage is always risky and even though chins and degus are similar, this can have disastrous consequences.

Seeing videos on Youtube that show owners that have successfully housed chins and degus together can trick you into thinking that this is easy.

According to Vetmed, on the whole, chinchillas are calm and shy.

On the other hand, even though degus are generally the same they can become aggressive if they don’t receive the right kind of social interaction and ultimately both animals could become stressed with the situation.

In our opinion, this is something you should never attempt as they are much happier in pairs of their own species and the risk of things going wrong is too high.

Can Chinchillas And Degus Live Together In The Same Room?

The next natural question that pops up is if chinchillas and degus can live together in the same room? But obviously in separate cages?

The answer to this is actually no, chinchillas and degus can’t live together in the same room.

This is still a huge problem when they are in the same room but in separate cages.

Even though degus are relatively quiet and will normally sit and groom each other, they will still make enough noise to wake a chinchilla across the room.

The same can be said for a sleeping degu and overall this isn’t fair on either animal.

The bottom line is that the sleeping patterns of these 2 animals will cause so many problems that you should keep them in separate cages and rooms.

Can Chinchillas And Degus Live Together In The Same Family Home?

You may also want to know if a chinchilla and a degu can live together in the same family home in different rooms?

The good news is that chinchillas and degus can live together in the same family home as long as they are in separate rooms.

All of the potential problems such as fighting and keeping each other awake won’t exist as long as they are in separate rooms.

Before you bring home a second pet you should always make sure you do your research and see if the animals can stay in the same room or not and it’s also wise to have a spare room ready.

Keeping chinchillas and degus apart is the best option for the most part due to the reasons we have outlined in previous sections and one we recommend.

Can Chinchillas And Degus Interact With Eachother?

In theory, chinchillas and degus can interact and play with each other, however, this is easier said than done.

There is a lot of work that needs to be done before 2 animals will feel safe and relaxed around one another.

This can be both tedious and time-consuming and until the animals become accepting of each other it can cause a lot of stress for both of them.

For this reason, we don’t recommend you interact your chinchilla with your degu and instead enjoy them separately.

Remember, you should really have 2 or more chinchillas in a cage and 2 or more degus too so there’s really no reason for them to come into contact with each other as they have all the social interaction they need from their own species.

Can Chinchillas Live With Any Other Animals?

When it comes to chinchillas living with other animals, either in the same cage, room or family home, this will be different for each individual animal.

As a general rule of thumb, you should never mix different species of animals in the same cage.

We have recently written some guides that share if you can house your chinchilla with rabbits and guinea pigs.