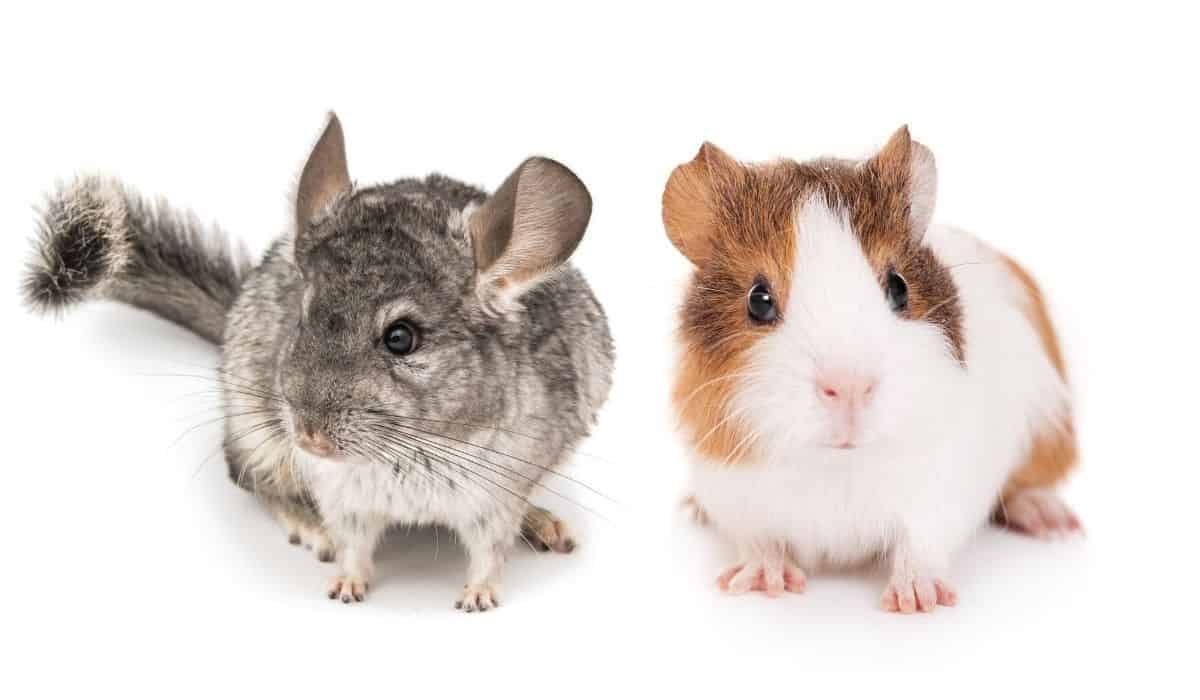 If you own a pocket pet such as a chinchilla, it’s only natural that you will want to own other pets such as guinea pigs.

As these pets are quite similar, owners often ask if chinchillas and guinea pigs can live together?

In this post, we will take a look in great detail and see whether it’s wise to house chinchillas and guinea pigs together? And if not can they still live in the same room or family home?

To help us do this we will gather the thoughts and opinions of vets and reputable experts to bring you the best information possible.

Firstly, It’s important to mention that chinchillas and guinea pigs are actually closely related to each other. Source:

Chinchillas originate from South America and more specifically north Chile, where they were kept both as pets and to make clothes from their fur.

The background of the guinea pig is similar to that of the chinchilla as they too originate from South America where the Incas domesticated them over 3,000 years ago. Source:

Chinchillas are naturally herd animals and can live in groups of up to 100 strong in the wild.

Guinea pigs are also hard animals by nature and can easily live in groups of more than 10.

Chinchillas commonly love to jump and climb and are considered extremely fast runners for their size, in fact, they are the fastest runners out of the common pocket pets and can clock up a top speed of 15mph.

The personality of guinea pigs is a little different as they can be very timid and stressed easily. They are also nowhere near as fast as a chinchilla, with their top speed racing around 6mph.

In fact, chinchillas fur contains around 20,00 hairs per square cm and is the reason they have been tragically hunted for thousands of years.

Can Chinchillas And Guinea Pigs Live Together In The Same Cage?

As we mentioned above, it’s not wise to house a chinchilla and a guinea pig in the same cage.

On the face of it, chinchillas and guinea pigs are very much alike and share many of the same care requirements.

After seeing this, you may be wondering why there’s a problem housing a chinchilla and guinea pig together?

But the truth is, there are actually a few very important reasons why you should keep your chinchilla and guinea pig separate.

The Cage Requirements For Chinchillas And Guinea Pigs Are Different

Technically you could house a single guinea pig in a chinchilla cage due to the recommended floor space it needs, but this would be difficult and isn’t recommended..

On the flip side of this, you couldn’t really house a chinchilla in a standard guinea pig cage.

Guinea pigs require a cage size of around 30”x36” at the bare minimum and this is usually either on one level or on a slightly raised two levels.

Chinchillas, on the other hand, require around 39”x59”x51” (tall) according to Bluecross. This cage is usually tall and over two to three levels.

This is to support their need for climbing and jumping and really doesn’t fit the needs of a guinea pig who are much more reserved in their behaviours.

While your chinchilla is jumping and often bouncing off the cage on the top level, this could be quite distressing and scary to the guinea pig down below and cloud easily cause them to feel scared and intimidated.

Chinchillas & Guinea Pigs May Not Get Along With Eachother

Both chinchillas and guinea pigs are herd animals by nature and spend their lives in large groups in the wild, although the common domesticated guinea pig (Cavia porcellus) doesn’t live in the wild any more and is only a domesticated animal.

You may see cute videos on Youtube where an owner has successfully bonded a chinchilla and a guinea pig but in truth, this is hard to do and not worth the risks that it comes with.

Both the chinchilla and the guinea pig could quite easily become territorial, stressed and aggressive.

With this being said, it’s far more likely that the chinchilla would be aggressive rather than the guinea pig.

Guinea pigs are known to be extremely timid animals and can be stressed from even the slightest of changes to their environment such as changes in food, cage furnishings and certain other animals they are uncomfortable with.

All of this can cause your guinea pig to become ill with stress and produce unwanted behaviours. Source:

The bottom line is that housing a chinchilla and guinea pig in the same cage has a strong possibility of causing stress, anxiety, fighting and much more.

Can Chinchillas And Guinea Pigs Live together In The Same Room?

It is possible that chinchillas and guinea pigs can live together in the same room but in different cages.

Having said this, there’s also a good chance that this could be a problem too.

As mentioned before, guinea pigs are very timid and even seeing another animal such as a chinchilla that is very active and known to jump and climb a lot could cause them to be stressed.

Of course, there is no guarantee this will happen and your guinea pig could be fine, however, if you intend on keeping both your pets in the same room we would always advise having another room ready and waiting just in case either animal isn’t happy with the situation.

Can Chinchillas And Guinea Pigs Live together In The Same Family Home?

The next question that needs answering is if chinchillas and guinea pigs can live together in the same home but in different rooms?

The answer to this question is yes, there’s no reason why you can own and enjoy both of these amazing pocket pets and the best way to do it is by keeping them in separate rooms.

In our opinion, you should only house animals in the same room if they have similar behaviours and temperaments and if not you need to have a separate room to house them.

You should always do your research in advance and make sure that you have an adequate room to separate animals.

Is It Safe For Chinchillas to Live With Any Other Animals?

Ok, so now we’ve answered the questions regarding chinchillas and guinea pigs living together in the same cage, room and home, let’s now see if chinchillas can live together with any other animals.

For the most part, the short answer to this question will be no, chinchillas should be housed separately to other animal species.

In fact, you can find out if chinchillas get lonely by checking out our recent post that shares all you need to know as an owner.

We have also put together some more guides that share if it’s safe for you to house chinchillas with other common pets.

We highly recommend you check those out before purchasing any of these pets.

You can see if chinchillas and rabbits can live together here…