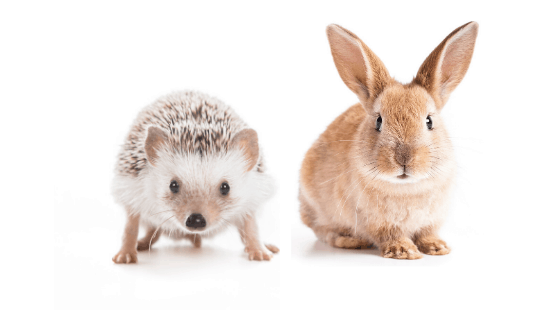 Once you’ve confidently owned a pet for a while isn’t only natural to want to bring a second pet. Two combinations that are becoming increasingly popular for owners are hedgehogs and rabbits.

The decision to own both a hedgehog and rabbit often uncovers lots of questions, one of which is, can hedgehogs and rabbits live together?

As this has now become a popular topic, we have decided to look at the research and information provided by vets and pet care specialists to answer all your questions regarding hedgehogs and rabbits living together.

Can Hedgehogs & Rabbits Live Together In The Same Cage?

As we just talked about previously, it’s not a good idea to house a hedgehog and rabbit in the same cage/hutch.

This can cause lots of problems for either the hedgehog, rabbit or you the owner.

Some of the issues may seem minor, whilst others are serious and could jeopardise the health of one of your pets.

Most rabbits are housed in an outside hutch. This reason alone means that it’s not possible for a hedgehog to share the same living space as the rabbit.

The outside temperature will obviously differ greatly throughout the year depending on your location in the world.

If the outside temperature decreases too much then the hedgehog could be tempted to hibernate and that can lead to serious health issues if hibernation doesn’t conclude successfully.

Hedgehogs are actually found to have no apparent need to hibernate in captivity according to experts.

Even if you decide to either bring them both inside during the winter or house them inside permanently, housing a hedgehog and rabbit in the same cage/hutch can still cause problems.

The vets at VCA-Hospitals state that hedgehogs require a temperature of 70°- 85°F in captivity to be healthy.

Hedgehogs require a heat lamp such as a ceramic heat emitter to allow their cage to remain at this temperature and keep them healthy.

Rabbits on the other hand only require a temperature of around 50° – 68°F.

The difference between the advised temperatures for both animals means that one of them is not going to have their best needs looked after if they live in the same enclosure.

Hedgehogs Are Nocturnal & Rabbits Are Crepuscular

The fact that hedgehogs are nocturnal is backed up by veterinarians such as Vetmed. This means they are most active throughout the night and generally like to be left alone during the day.

Rabbits, on the other hand, are known to be crepuscular as mentioned above. This basically means they are most active from dawn to dusk.

There isn’t any conclusive evidence as to whether rabbits are more active around these times of day, however, scientists have come up with some pretty interesting theories.

The most valid of these theories is that rabbits have lots of potential predators in the wild and most of them are active either during the day or at night.

The rabbits realise that the period of dawn through to dusk is the safest time to graze with the least chance of being confronted by a predator.

What even the true reason for rabbits being most active at this time of the day, the bottom line is that it’s not a great idea to house two animals in the same enclosure that are active at different times. 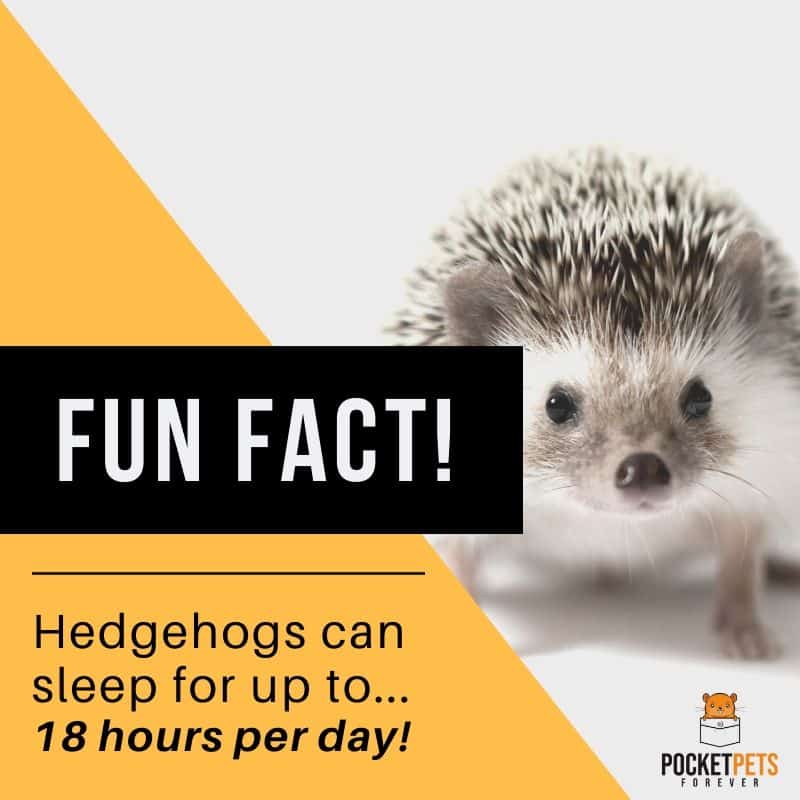 Both Animals Love Their Own Space

Hedgehogs are solitary animals and don’t really enjoy the company of other animals very much.

Even though rabbits look cute and harmless, they can get aggressive if they feel threatened and they are known to bite and kick according to the rabbit.org

They have powerful back legs that can really do some damage to a hedgehog and on the other hand, the quills of a hedgehog can injure a rabbit also.

Rabbits are obviously much bigger than hedgehogs and living in the same space could cause trampling accidents too.

With all things considered, these amazing animals should be allowed their own space to explore and be happy.

Can Hedgehogs & Rabbits Live Together In The Same Room?

If you decide to house your rabbit indoors permanently or even just for the winter, you might want to know if your hedgehog and rabbit can occupy the same room whilst in different cages?

We would actually say that there’s an equal chance of this both working and not working.

Small animals such as hedgehogs can still feel threatened when a larger animal is around even if it’s not able to come into direct contact with them.

There’s also still the problem of hedgehogs being nocturnal and rabbits being crepuscular.

If your hedgie is going to be making noise all night whilst they’re most active then this could cause a problem for the rabbit.

Using a silent exercise wheel like the one we recommend in this post here is always recommended as it will make a huge difference to the amount of noise they make throughout the night.

After all the considerations above, it’s a good idea to try and house both the hedgehog and rabbit in the same room whilst in different tanks and see how things go.

If your hedgehog is not settling to the presence of your rabbit or the nocturnal nature of your hedgie is disrupting your rabbit then ensure you have a second room to house one of the animals in.

This is the only way to ensure that both of them will be happy and enjoying the housing arrangement.

Can Hedgehogs & Rabbits Live Together In The Same Home?

As we have mentioned a couple of times already in this post, most rabbits are housed outside.

If you do choose to house your rabbit indoors either for the winter or permanently, the safest housing arrangement that will cause the least disruption is to have your hedgie and rabbit in separate rooms.

This can be hard if you are struggling for room to accommodate pets in separate rooms but in the long run, this will be the best option.

The obvious choice is to try and move your hedgehog to a different room as their cage is much smaller than the rabbits and can be moved pretty easily.

Do Hedgehogs And Rabbits Get Along & Play Together?

It may seem cute to watch a hedgie and rabbit playing together but the reality is that this can be a very dangerous situation especially for your hedgehog.

Your hedgie is likely to be very timid and curl up into a ball for a long time until he feels comfortable with your rabbit.

If your rabbit feels threatened he could kick out and then your hedgie has the possibility of getting injured and at the very least feel threatened by the rabbit for a long time.

There’s no reason why you can’t own and enjoy both of these amazing pets but it really is best to keep them separate and let them have their own space and keep safe.